Android Studio is an IDE based on IntelliJ IDEA used for android application development. It is released on 15th may 2013. This tool has more options for Android Development, making the process faster and more productive. A “live layout” was shown that renders your app as you’re editing in real-time. In this tutorial you can learn steps for Installing Android Studio.
Know more about android studio features from Android Studio Features.

It is a known issue with android studio. On some Windows systems, the launcher script does not find where Java is installed. If you encounter this problem, you need to set an environment variable indicating the correct location. Select Start menu > Computer > System Properties > Advanced System Properties. Then open Advanced tab > Environment Variables, add new system variable JAVA_HOME that points to your JDK folder, for example C:\Program Files\Java\jdk1.7.0_21.

2.Android SDK is out of date or is missing templates

This may happen because you already have your SDK installation up for Android Developers Bundle with eclipse. First open your SDK manager in the ADT Bundle and update you Android SDK Tools from 21.1 to 22 and then open your Android Studio. For windows user the tools and other SDK packages are saved with the Android Studio application directory. Windows:

\Users\AppData\Local\Android\android-studio\sdk\ Mac: /Applications/Android\ Studio.app/sdk/ Make sure your android-sdk-path is correct and the sdk tool version is 22 or later. Once android studio started, open the Configure > Project Defaults > Project Structure, set your project sdk is Android SDK. Then select SDK tab and select build target (eg: Android 4.2.2). Now  you should be good to start.

A blogger, a bit of tech freak and a software developer. He is a thought leader in the fusion of design and mobile technologies. He is the author of Xamarin Mobile Application Development for Android Book (goo.gl/qUZ0XV3), DZone MVB and founder of stacktips.com.

Just installed Android Studio on Windows which then invokes Android Studio Setup Wizard. The Downloading Components window then tries repeatedly to download https://dl.google.com/android/repository/android_m2repository_r47.zip
I assume this is some sort of permission issue so I tried launching studio64.exe with run as administrator but the same problem persists. Any ideas?

is this problem resolved? am also facing same issue

when i start android studio i get this feedback 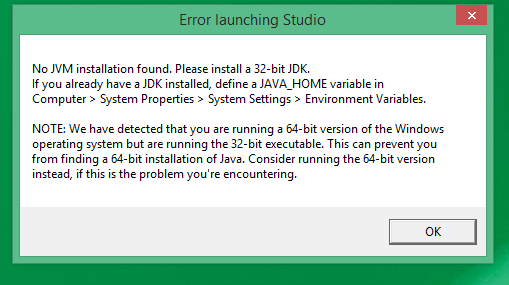 anyone can help me

why i cannot update my android studio? anyone can help me solve this issue?

every time when i want to start android studio.it only stuck on this page. pls help how can i get rid from it.

strike
Reply to  As u wishes

does your problem solved?I am facing the same issue.

did u get any solution?

I am also facing the same problem. Really its frustrating. Please anybody give solution.

What is the error are you getting?

What is installing again? The SDK components or the Android Studio IDE itself ?

Are you using Android studio stable version or v2.2 beta?

Stable.
In my last attempt I uninstall and undid everything made until now. Then installed everything again and set all those vars and all other suggestions again, all at once, and now it’s working fine.
I have no idea what fixed the problem and I don’t care also.
Thanks.

Good to hear it is working. Happy coding!

First u hav to download Java and jdk. Then copy paste the link and then try. It ll work

Great tutorial ,if still cant figure out how to, go :
https://ishankwebdev.wordpress.com/2016/03/02/androidsetup/

i’ve tried downloading it many times and keep getting this error when i tell it to run.. please help

What is the error ?

Hi All, Can any one help me solve this prob. I am not able to start Android Studio due to this

Hi to all, Please help me with this problem!!!

facing android studio project loading issue ,in this take a long to load but not open the project plzz help me

Hi to all, Please help me with this problem!!!

Did you set your class path?

Great article ,if still cant figure out how to, go :

Can you give a try with a lower version of JAVA SDK?

What is the problem ? do you see any error?

Hi,
I installed android studio and set the JAVA_Home Variable but still it is not working…

Anand, try setting a new System variable (The “New…” button in the bottom half), as it isn’t set as a system variable but rather a user one

Hi,
I installed android studio and when i open it an error appears on screen Even I added JAVA_HOME variable in sysyem settionngs. i attached the pics please help.

The above solution worked for me!!! Thanks

Hope you have downloaded latest version of A Studio?

Yes .. but i tried with older version that was same problem.

do you have java installed? and environment variable set?

Restart Android studio, and resync project. Should work for you.

If your environment setup is done recently, you may require to restart your system. Please restart and check if it works,

anyone knows why I am having this problem?
The android studio setup cannot detect my jdk
ps: I already set the environment variable – JAVA_HOME

Thank you so much!

I went to http://www.oracle.com/technetwork/java/javase/downloads/jdk7-downloads-1880260.html and downloaded the 64-bit Java installer.

After I ran the installer for 64-bit Java, Android Studio started for me, without any problems.

If your system is 64 bit than yes

Thanks, for people having java sdk already installed, just set the location to jdk7, it will work

Thank You! The JAVA_HOME and PATH system variables helped me get it started.

Thank you for reading our tutorials.

Help us reach out with information by sharing news and articles in your network.